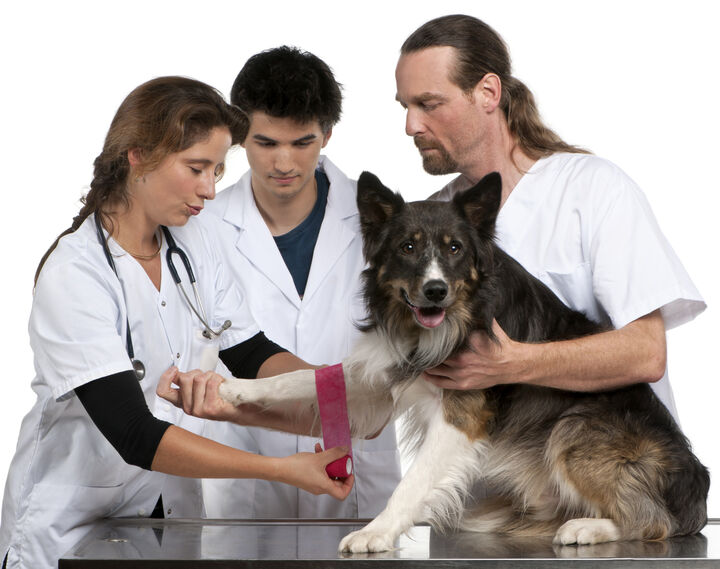 Hip dysplasia is an abnormal formation in the hip. It can cause painful arthritis and lameness. It is an genetic (Polygenic) and is effected by environmental factors.

Of 6870 Border Collies x-rayed an astonishing 11% had dysplasia. It is common in most breeds.

The disorder causes abnormal development in layers of the tissue in the eye under the retina called the choroid. This cause what is called Choroidal Hypoplasia. In most cases the dogs are born with CEA, and can be found in puppies as young as 4-8 weeks old.
There is no treatment for this.

About 2.5% of Border Collies in America is effected by this, and around 25% are carriers.

Progressive Retinal Atrophy is an inherited disease of the retina. The rod cells in the retina are programmed to die. PRA occurs in both eyes simultaneously and is non painful.

The stages of PRA is going from poor vision in darkness, to going 100% Blinde.

It happens when the lens capsule separates 360° from the zonules that holds the lens in it’s place. Which puts it in a complete dislocation of the prior location. Most likely to effect dogs between the ages of four and nine.

It is a inherited progressive condition that affects both of the dogs eyes, normally in the same ways.

Where the Cornea, the clear outer layer of the front of the eye, is mostly affected by this.

The disease is not associated with other diseases. It is common in dogs.

Epilepsy or Status epilepticus is a neurological disorder. It causes dogs to suddenly have uncontrolled and recurring seizures. The physical attacks can cause loss of consciousness. Seizures can be caused by trauma, exposure to toxins, brain tumors, genetic abnormalities, issues with he dogs blood or organs. There is quite a few other reasons, and some unknown. These are called idiopathic.

The thyroid gland, located in the neck makes a hormone called thyroxine. Thyroxine controls metabolism  (Which is what makes food to fuel.) But with Hypothyroidism the gland doesn’t make enough of that hormone.

it’s a common disease that affects all breeds.

Osteochondritis dissecans:
Endochondral ossification is a normal bone growth process by which cartilage is replaced by bone in the early development of the fetus. Osteochondrosis is a pathological condition in which normal endochondral ossification, the metamorphoses of cartilage to bone is disturbed. The disturbance is often caused by a disruption in the blood supply to the bone.

I am not a specialist in the matter and have only used sources to get my information.

Is there a way to find out if the dog is bred for hearding ability or for being healthy?

If getting from a breeder you should always want the dog to be microchipped and have a family tree paper. Their parents should have had full health checks (X-rayed hips, elbows and so on) Their eyes should be tested. You should ask to meet the puppies parents to see so they aren't sick.

I don't know what else tips i can give sense i never myself have bought from a breeder.

My best tip is to (for any breed) save to get full heath checks on the puppy, x-rays and eye checks. :)

To participate in the discussion, you must first become a member. It is quick, simple and free. The membership gives you access to all our communities.